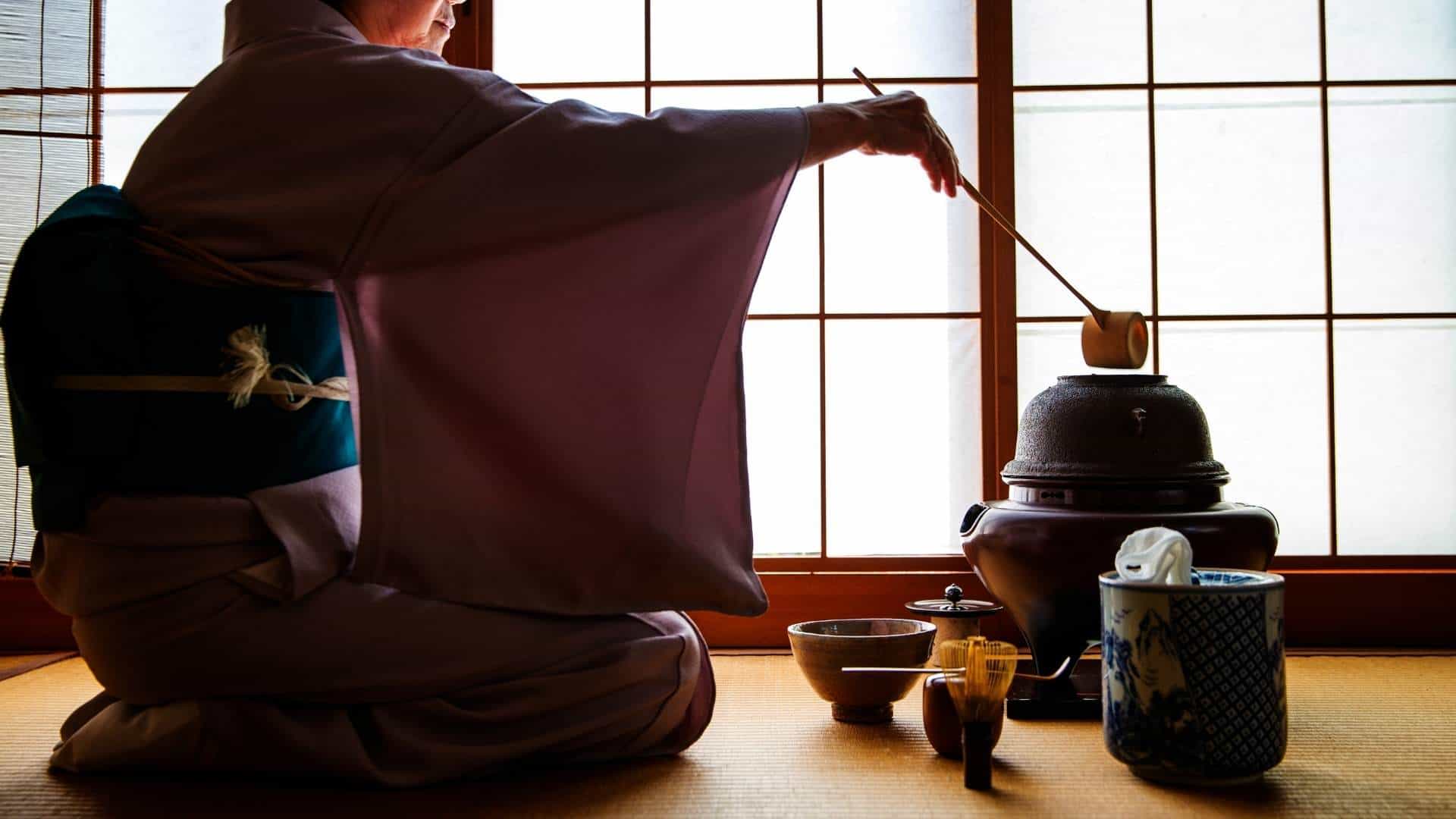 Everything you need to know about Japanese Tea Ceremony, A Harmonious Ritual

Are you a tea lover? Do you like matcha? Do you know that the Japanese not only love drinking tea but there are also activities around tea? Japanese tea ceremony, or, sadō/chadō (茶道), is an important cultural activity in Japan. It is a ceremonial preparation and presentation of a Japanese powdered green tea—matcha (抹茶).

The tea ceremony is essentially a process of searching for peace in your mind, and it is a crucial thing to learn the history and practice of the Japanese tea ceremony to become a Japanese cultural expert. Let us get things started and explore the fascination of the tea ceremony together.

As you may have expected, the ceremony in the 8th century is very different from the ceremony today. The tea ceremony nowadays originated from Zen-Buddhism. One of the key influencers is a Chinese author called Lu Yu. During the Tang dynasty, Lu Yu wrote a book called The Classic of Tea (茶经). This work is the first monograph on tea available in the world.

By the end of the 12th century, a Budahist priest, Myōan Eisai/Yōsai (明菴栄西), who was known for founding the Japanese line of the Rinzai school of Zen Buddhism, first introduced the concept of tencha (点茶). Basically, tencha means mixing powdered matcha with hot water. This is the prototype of today’s tea ceremony, despite it being first used as a religious ritual. It is worth noting that at the time, tea was prepared for priests and upper class only.

It was not until the Muromachi period that tea became an everyday beverage that started to become accessible to everyone.

There are two historical figures that significantly influenced the development of tea ceremonies: Murata Jukō (村田珠光), the founder of the Japanese tea ceremony, and Sen no Rikyū (千利休), who is generally considered the most influential person of the Japanese tea ceremony. For Jukō, the most important values in his tea ceremony include: 1. kin, reverence; 2. kei, respect; 3. sei, purity, and 4. jaku, tranquility (pp. 30 in Jennifer Anderson’s An Introduction to Japanese Tea Ritual). As for Rikyū, he is a figure that has often been portrayed in popular culture. There are movies and games about him, calling him the tea master. His four central values are similar to Jukō but slightly modified: harmony (和, wa), respect (敬, kei), purity (清, sei), and tranquility (寂, jaku).

The term for equipment for a tea ceremony is called chadōgu (茶道具). Although the exact utensils that will be used during a tea ceremony vary, there are some most essential elements, including:

The tea ceremony is not just about taste but also an aesthetic performance. Every placement of the equipment is from the guests’ angle, instead of the host’s.

As I have mentioned above, there are different schools that follow different protocols. A formal tea ceremony is a refined practice that takes up to hours.

Briefly speaking, there are several steps that you will find in almost any ceremony that you attend.

The procedure of a tea ceremony can be quite different depending on whether it is hosted during the summer or winter season.

Yes, the tea ceremony is not excluded from foreigners; as a tourist or newcomer in Japan, you have the opportunity to attend a tea ceremony of your choice. Many organisations in Japan offer varying tea ceremonies, and you can choose which one to go for depending on their different focuses and degrees of formality. You don’t have to worry about the potential language barrier if you don’t speak Japanese, as there are several organisations offering tea ceremonies in English. This is a link to one of the most popular destinations: https://mai-ko.com/culture/tea-ceremony/.

The tea ceremonies offered there are relatively shortened from a very formal one; it is nevertheless a good experience for starters. If you are not in Japan but still love to experience a tea ceremony, you can book one online. Although you won’t be able to taste the tea, you can still learn the history and concepts of an authentic Japanese tea ceremony and possibly practise it on your own.

What to expect when attending a tea ceremony?

As you may expect, different tea ceremonies from different schools and organisations have varying rules. But don’t worry – you are not expected to be an expert and know it all like a tourist. After all, you are there to experience and learn. It is nevertheless important to bear some points in mind to show your respect for this ritual. First, a tea ceremony is a formal event, meaning that you should dress accordingly. You don’t need to wear anything too fancy, but you are expected to wear something plain and modest. You should not wear strong perfumes that may distract the ceremony. Second, you need to bow before entering the tatami room where the tea ceremony takes place. And when you enter the room, you need to bend over to show your humility. Ideally, you will sit in a seiza position. Third, before you enjoy the tea, you will be served with a Japanese sweet. You are expected to eat sweets before enjoying your tea. After you finish your tea, you are expected to bow again to the host to express your gratitude.

As a big tea lover, I hope this article has sparked your interest in the tea ceremony. Let me know if you have already attended a tea ceremony and your thoughts about it. And if you haven’t experienced it, I would certainly recommend you to check out one. Many of my friends were surprised after going to a tea ceremony.

Attending a tea ceremony is a truly peaceful experience that clearly contrasts the busy, modern everyday life. You will see that the purpose of a tea ceremony is not simply about enjoying tea; you will get a sense of the very basis of the Japanese’s life philosophy and aesthetics. The hope of many hosts is besides receiving and enjoying tea, that their guests can find harmony and tranquillity during and after the tea ceremony.