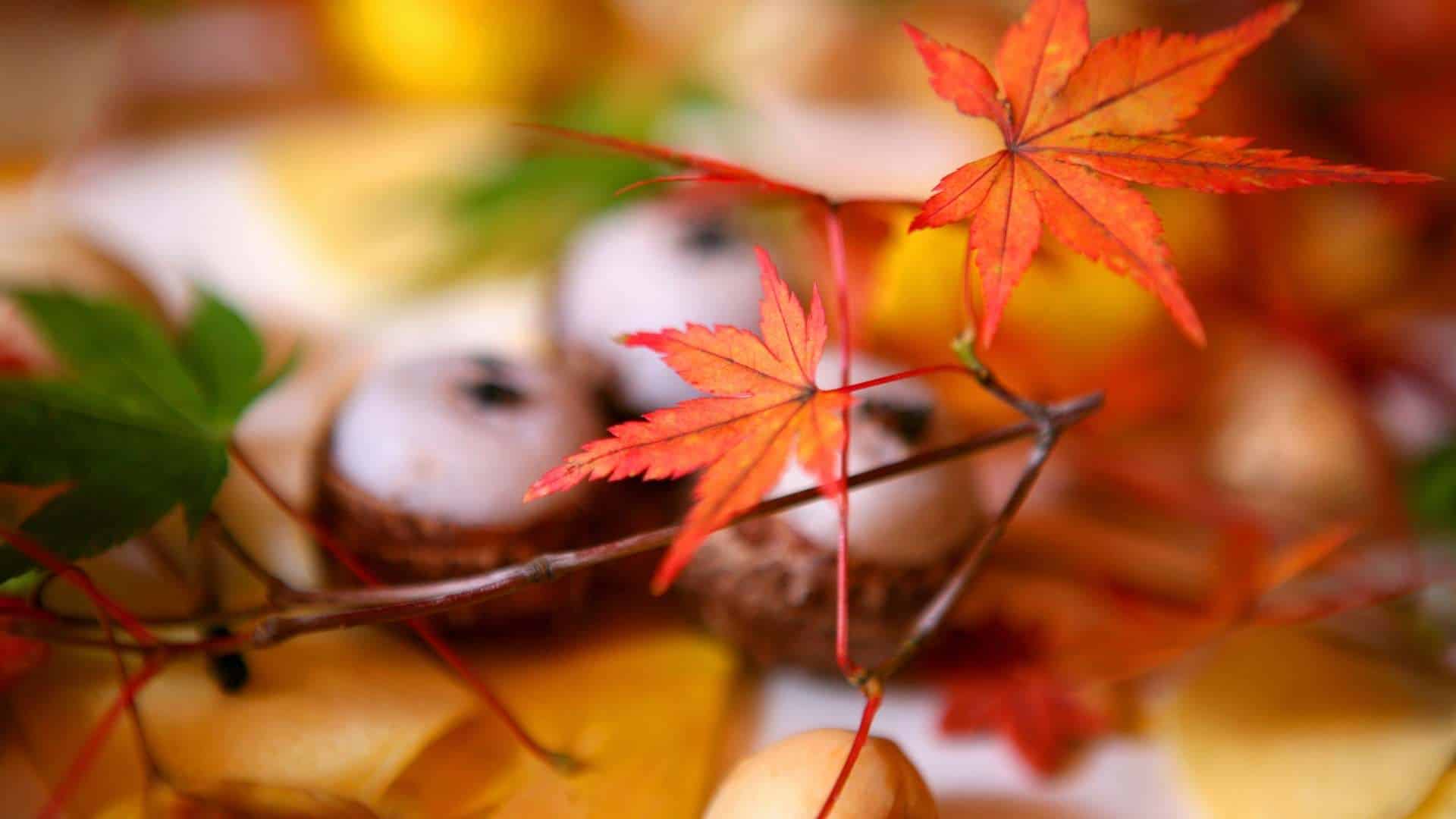 What to Eat in Autumn in Japan? 9 Autumn Japanese Food & Drinks to enjoy in Autumn

Autumn officially starts mid-late Autumn in Japan. Autumn is always my favourite season because of the perfect weather, the changing colours, and seasonal shopping. What am I forgetting? Right, food. Here, let us take a look at 9 incredible autumn Japanese food and drinks to enjoy in Japan!

Typical fall-themed meals in the West include ingredients such as turkey, pumpkins, squash, sweet potatoes, and crisp apples. However, there are many different fall ingredients and traditions around the globe. For example, mooncakes in China, chestnut stuffing in France, chocolate nut cake in Mexico…

You must be wondering, how about Japan? There are many delicious autumn foods in Japan, because it is the season for eating. Agreed or not, we have prepared some of our personal favourites for you! Hopefully, this list will convince you!

Autumn food and drinks in Japan

Autumn can be quite chilly. If the wind hits and you have been feeling cold, an oden should make you feel better. Although oden is typically seen as a winter food, we start having it as early as in mid autumn. Oden is a type of nabemono (one-pot dish). Basically, it is a soup with many delicious ingredients such as tamago, meaning boiled eggs, hanpen/chikuwa, aka. different sorts of fishcakes, and gyozamaki, which is a deep-fried gyoza dumpling wrapped in fish cake (yes, they are my favourites! ?).

The food you will find in an oden varies from region to region. Other ingredients you can expect include roru kyabetsu (stuffed cabbage), atsu-age (deep fried tofu), potatoes, kombu seaweed, satoimo (taro), and many more. Different regions also offer varying broths and dipping sauces. Actually, oden has another name that might sound more familiar to some of you: Kantō-ni (関東煮). This is how people call it in Nagoya. Oden is fast and easy to prepare, making it a great option to go or to cook at home.

Oden has gained popularity not only in Japan but also in the entire East Asia. You can find oden in convenience stores in China, for instance.

Matsutake is a luxury ingredient in Japan because it is hard to find. It is the most expensive and precious kind of mushrooms. You will find a combination of multiple scents and tastes, meaty, sweet, cinnamon-like… There are many ways to cook and prepare matsutake mushrooms. One of the common ways is to grill. Adding matsutake mushrooms in your oden or broth is another popular thing. You can also stir-fry and serve them with fish and meat. However, the taste does not go well with cheese or dairy products. Matsutake is considered the “king of autumn foods” in Japan.

An interesting fact about matsutake mushrooms: many believe that they are associated with Japanese longevity (check out our article on longevity: https://flipjapanguide.com/longevity-in-japan/). Matsutake is rich in vitamin B3, vitamin D, iron, and more minerals. It prevents you from hair damage, diarrhea, atherosclerosis and helps to reduce the chance of getting tumor and cancer.

What can you eat with oden and matsutake? Shinmai is the food you are looking for. Autumn is the season for shinmai. Shinmai is the Japanese word for new rice. Rice that is harvested in other seasons can’t be called shinmai. In order to be considered as shinmai, it has to be produced and packaged before Dec. 31 of the calendar year. Shinmai tastes very different from rice in other seasons.

For example, shinmai has a strong sweet amora that you won’t find in other seasons. It is more moist and tender in comparison to other rice. Shinmai is a crucial element of Japanese cuisine and culture. It is the basis for many foods. However, cooked shinmai with seasonings already has an amazing taste.

Sanma, or pacific saury, is a popular seafood in Japan. Sanma is a typical autumn food and is often served with rice and miso soup. Personally, sanma is one of my favourite autumn foods. There are many ways to prepare it. The most classic way is to salt and grill it.

Depending on your taste and preference, you can use lime, soy sauce, sudachi, etc. to season it. Every September, a festival called Meguro Sanma Festival (Fish Grilling Festival)  is held in Tokyo. In this event, you will get grilled fish (sanma) for free! This festival takes place in September because sanma is the most fresh and contains most oil in early Autumn. If you are in Tokyo that time of the year, make sure to join the event because you will be able to taste the most juicy sanma ever.

Yaki-imo means roasted sweet potato. Roasted sweet potatoes are popular in East Asia, but each country has its own version. In Japan, yaki-imo is prepared in heat stones. You will usually find a yaki-imo in a truck on the side of the road. Although many say it is a winter food, we start having yaki-imo as early as in autumn. The best kind of yaki-imo is the simplest kind. You don’t need to add lots of seasonings or flavours to make it taste good. A good yaki-imo should be soft and tender. It has a natural sweet scent that you can smell. Yaki-imo is also easy to prepare at home. You can cook it either in a pan or in an oven. However, pay attention to the time, as it is very easy to overcook or even burn it.

We know that autumn is the season for pumpkins and sweet squash, and we love pumpkin spice latte and squash soup. Do Japanese people also eat them? Yes! But there’s a Japanese version. Kobacha is a Japanese variety of winter squash. Kobacha is available all year around, yet its peak season is autumn. Kabocha in early autumn also tastes the best.

My favourite way of preparing kabocha is deep fried tempura. You can eat it alone or in a broth or ramen.

Kuri, or Japanese chestnut, is an important ingredient of your autumn treats. Kuri is a great food to enjoy directly. Because it tastes both sweet and savoury, kuri also makes great desserts. For example, kuri dorayaki is a popular Japanese pancake. Kuri yokan, or chestnut jelly cake, is another dessert made of kuri. Kuri also tastes amazing with rice. Kuri gohan (chestnut rice) is a traditional rice recipe. All you need is kuri, black sesame, shinmin and additional seasonings of your choice to prepare a simple yet appetizing meal for autumn.

Be careful though, kuri can be addictive 🙂 But don’t worry, it doesn’t hurt your body.

Not only vegetables, autumn is also a great season for fruits. Kaki, or Japanese persimmon, is one of the most loved fruits in autumn. It tastes sweet and has a soft texture. In fact, it is one of the foods that I miss the most overseas (it is not so easy to find in Europe :/). Still, I was able to find hoshigaki (dried persimmon), a tasty dried fruit made of persimmons.

Kaki is called the “magical fruit” in Japan. You may hear people refer to kakis as orange miracles. As you may expect, kaki has very high nutritional values. Kaki is extremely rich in fiber and is a great source for vitamin A, vitamin C, potassium, and manganese. You know the saying that an apple a day keeps the doctor away? Kaki is also a great fruit with lots of health benefits. According to nutritionists, eating (or rather, enjoying) a medium-sized kaki a day should help to prevent atherosclerosis.

We have talked enough about food… how about drinks? Although you can find sake all year long, autumn is the best and “official” season for sake drinks. The reason behind it is that we brew sake during winter and bottle it in spring months. In order to have the best taste, you should wait for several months to savour it.

The autumn sake is called hiyaoroshi（ひやおろし), which is only available from September to November. Actually, sake tastes different even in different periods of autumn. For example, sake in the beginning of autumn still tastes bitter. And the taste and aroma becomes more condensed later. I find hiyaoroshi goes very well with fish and meat dishes.

In case you are curious, seasonal sakes are named differently:

What are you eating this autumn? What are autumn foods in your country? Let us know and I would love to exchange recipes sometime 🙂

If you are travelling to Japan in autumn, we would love to show you some of the most amazing autumn foods and create a food tour for you.