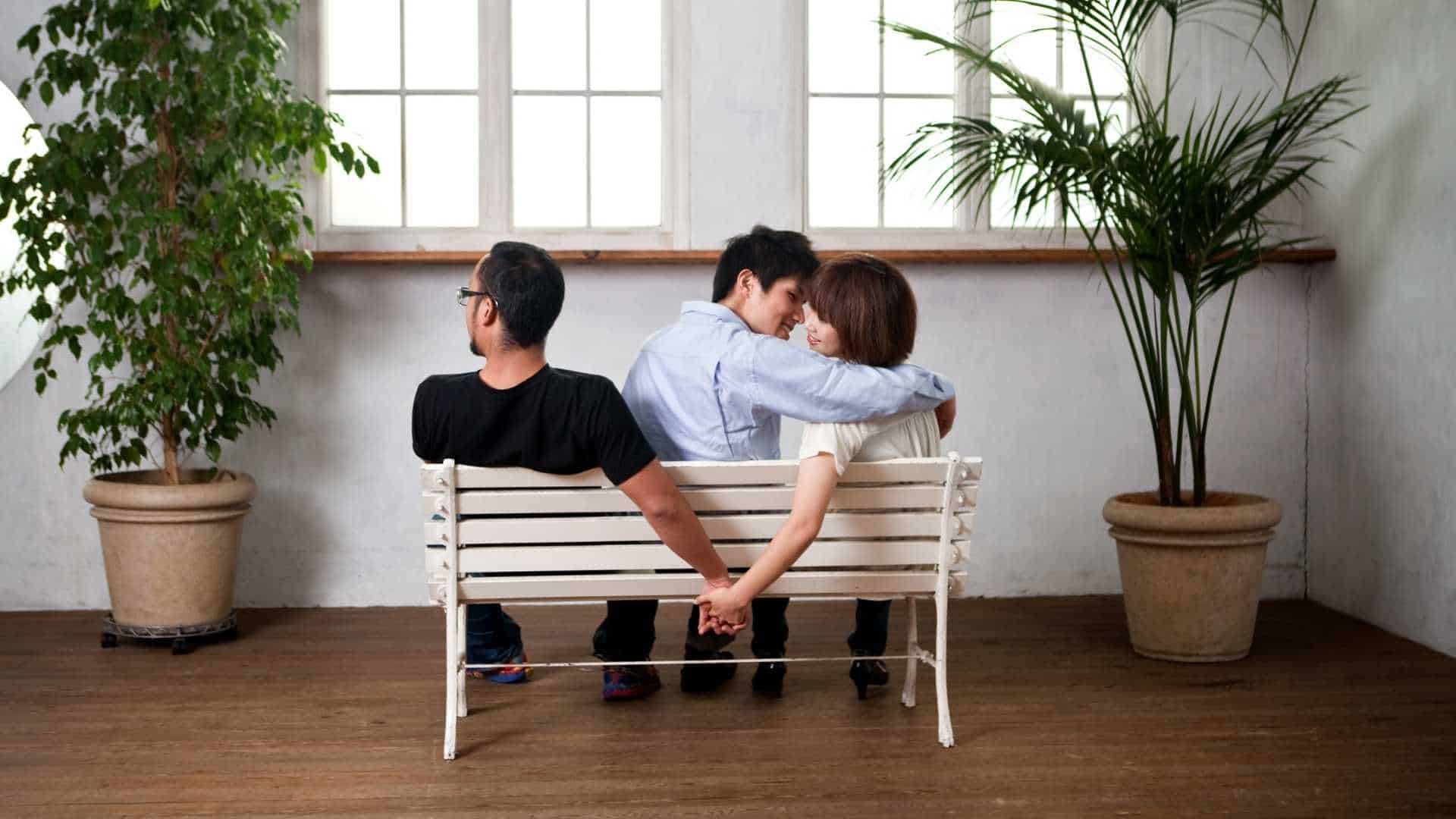 Cheating in Japan: heinous betrayal or a part of Japanese dating culture?

Though adultery is frowned upon in most parts of the world, it’s tolerated and even accepted by some as a natural part of Japanese dating culture. I first noticed this lax attitude in Japanese relationships towards cheating in Japan through Japanese novels, where the characters that cheat aren’t villains, they don’t show remorse, and they even rationalise and justify their infidelity.

It made me wonder if these books, while of the fiction genre, reflect a real part of Japanese society. After a few more years of watching documentaries and studying Japanese culture and Japanese relationships in college, the answer I’ve arrived at is: yes. Yes, Japanese society is more lenient and understanding of infidelity than other nations.

For some controversial topics about unspoken Japan, find out more about love and sex in Japan, cheating without cheating in Japan, “Gaijin Hunters”, The Paris Syndrome, and Sexualisation of young Japanese girls.

CNN released a docuseries in 2019 titled “Sex & Love Around the World”, and the first episode focuses on Japan and Japanese dating culture. In that episode, many Japanese wives who were interviewed revealed that they and their husbands were not intimate, and some even confessed to finding intimacy and satisfaction elsewhere.

While this in of itself is not a Japanese issue, the nonchalance with which these confessions were made—as though it wasn’t “a big deal”—is. When one interviewee was asked who she said “I love you” to, she casually replied, “to my husband and my boyfriend,” and didn’t seem to realise how taboo that answer was until CNN’s Christiane Amanpour expressed her surprise.

Knowing all this, it’s unsurprising to learn that, in a study by The Economist, Japan ranks 7th in the world as a country that finds cheating morally acceptable, or not a moral issue at all.

Why is cheating perceived so trivially in Japan? Why do these couples remain together? And, if both parties know about it, does it then make it an open relationship/marriage, and can it then still be labelled ‘cheating’? In this blog post, we’ll explore these issues.

What counts as cheating and what doesn’t will depend on who you ask. For the purposes of this blog post, we’ll be using the definition “having a romantic/sexual partner on the side.”

Why do Japanese people cheat on their partners?

The first episode of the aforementioned docuseries, Sex & Love Around the World, explores the various ways Japanese women find physical, mental and emotional satisfaction in Japan, and through that exploration, we learn about “sexless marriages” here. According to some of the interviewees, many Japanese couples, after getting married, tend to become “sexless”, prompting both partners to cheat.

But, how did these marriages become sexless in the first place? Or, was there even that much sex to begin with?

In that episode, we learn that there’s a severe lack of intimacy—both emotional and physical—in Japanese society. Japanese couples don’t kiss or hold hands in public; some don’t even in private. Japanese people don’t say “I love you” to their partners.

Japanese people aren’t outspoken about their emotions with their partners. In one case, an interviewee says even his parents didn’t hug or kiss him when he was a child. All of this has led to a society that doesn’t know how to be intimate; how to share their thoughts and feelings; how to ask for skinship.

One interviewee in the documentary revealed that she and her husband hadn’t had sex in more than ten years. When asked why she wouldn’t try to initiate intimacy with her husband now, she answered that it’s “been too long.”

But, she also says that she and her husband have respect for another, even without sex, and expresses that she is content with having a civil, marital relationship with her husband while having a sexual, romantic one with her secret boyfriend on the side.

Who do they cheat with?

If a significant number of Japanese people are uncomfortable with sexual intimacy, then who do they cheat on their partners with? Some may target foreigners who they believe can treat them better romantically and sexually (more on interracial relationships in Japan here). Others may choose to date younger Japanese people who are becoming increasingly okay with intimacy.

One very integral part of Japanese society is the philosophy of maintaining peace. This philosophy created ganman culture, the word ‘ganman’ translating to ‘endure’. Be quiet and endure the hardships if it will maintain peace in your society, community, household or relationship.

This is why some victims of molestation on trains will not cry, “chikan (molester)!” or ask other passengers for help, as such an outcry would disrupt the peace. They decide, instead, to just quietly endure it until it ends (thankfully, times are changing and more victims decide to speak up these days).

We can see ganman culture in sexless marriages as well, especially if there are children involved. Sexless couples will remain together, and cheat on the side, if it means that the household remains together as one unit.

Whether having divorced parents or cheating parents is more detrimental to a child’s upbringing is another question for another time. As for couples who don’t have children, perhaps they fear hurting their partners’ feelings if they were to leave, and so they choose instead to remain with the person, to “maintain peace”, while having a secret affair.

Another part of Japanese culture is the shōganai culture, which translates to “it-can’t-be-helped” culture, or “that’s-just-the-way-it-is” culture. Some Japanese couples may think that their relationships becoming sexless is just unavoidable; that it’s just something that happens to couples at some point in time.

With that mindset, it’s not hard to understand why they feel little remorse for their infidelity. After all, isn’t that just how life works? Isn’t that what everybody does in Japan?

There have been cases of both partners in a relationship knowing or suspecting that their partner is cheating, while cheating themselves. Yet, it goes unconfronted and undiscussed, maybe because Japanese people aren’t accustomed to confrontation or discussing such issues, or maybe because they don’t mind. In other words, both parties have an unspoken agreement to remain together while seeing other people.

In those cases, is the relationship an open relationship? Or does the “unspoken” in “unspoken agreement” make it unfaithful? Food for thought! Let us know what you think!

Being cheated on is oftentimes a very painful, degrading and humiliating experience, but some Japanese couples appear to have taken cheating and made it a compromise instead of a hurtful act.

Cheating seems to be a way for some Japanese couples to make their unhappy relationships tolerable or even happy, allowing them to have everything they want—a marriage, a family, sexual and emotional satisfaction, stability and security, status—even if it means having to have multiple partners.

But the tides are turning, and the younger Japanese generation are becoming more intolerant of adultery. Maybe part of it is due to the increasing numbers of foreigners in Japan who bring with them their opposing and stricter attitudes towards cheating, or maybe it’s because the younger generation learned from their parents’ misdeeds.

Find out more about how Japanese people cheat without cheating here.

For some controversial topics about unspoken Japan, find out more about love and sex in Japan, cheating without cheating in Japan, “Gaijin Hunters”, The Paris Syndrome, and Sexualisation of young Japanese girls.

Have you ever heard of the Tokyo neighbourhood, Meguro? Are you thinking about visiting this...
Read More

Are you thinking about visiting this unique area near Tokyo or even staying in the Yokohama...
Read More

Best Firework Festivals in Tokyo: 8 Summer Events not to miss 

Firework Festivals are a huge tradition in Japan that has a history that spans over 300 years! It...
Read More

Internship in Japan: Tips to find an internship for a Japanese company 

Is Japan Rail Pass worth it? The simple guide you need for JR Pass

If you’re planning a trip to Japan—or even just looking into it—you’ve probably read about the...
Read More

How to find the right Japanese language school in Japan

Going to a Japanese language school in Japan is one of the best ways to study the language and...
Read More

Have you ever heard of the neighbourhood near Tokyo called Kawagoe? Are you thinking about...
Read More

Have you ever heard of the Tokyo neighbourhood, Ryogoku? Are you thinking about visiting this...
Read More

What to do in summer in Japan: 10 best ways to enjoy Japanese summer

The temperature is getting hotter and it's finally time to put your big winter coats away. The...
Read More

Workation in Japan: Best city in Japan for workation

Recently we have seen the word "workation" a lot. The term is a combination of the words "work"...
Read More