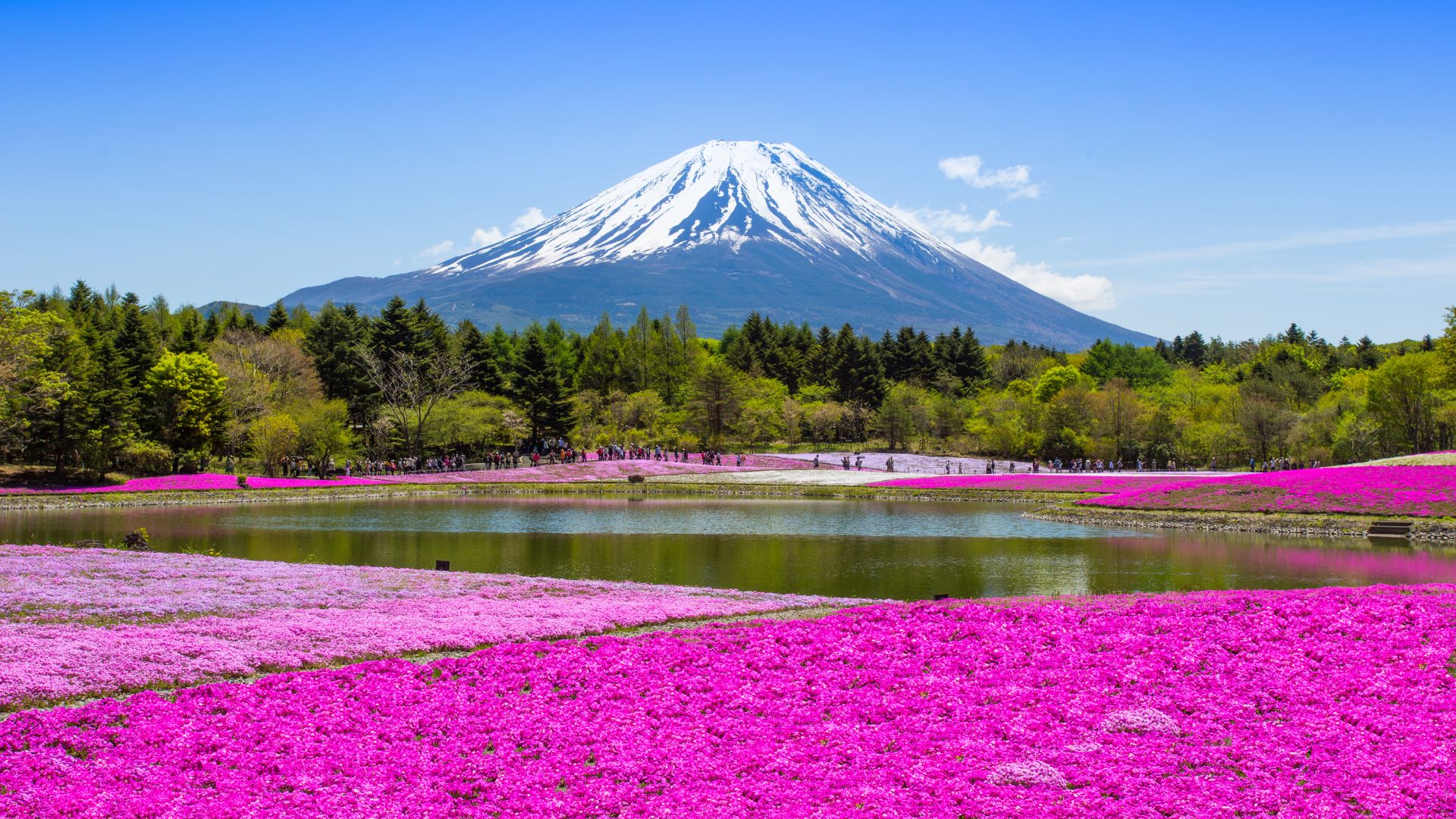 Moss phlox in Japan: When and where to see Japanese Moss phlox 

Each and every flower in Japan represents something special. No matter the season, the time of the year or the prefecture in Japan, you seem to be able to find different flowers at every turn. Moss phlox in Japan are so gorgeous and there are beautiful spots around the country to find these seasonal flowers. To help you experience Japanese Moss phlox to the fullest, let’s have a look at moss phlox in Japan, and when and where to see moss phlox.

Find out all about the different flowers in Japan you can enjoy throughout the year here. Check out what, when and where to see these flowers here: Cherry Blossoms, Tulips, Azaleas, Roses, Poppies, Salvia, Hydrangea, Iris, Lavender, Indian Lotus, Sunflowers, Ume and Moss phlox.

What is Moss phlox in Japan?

Have you ever heard about moss phlox? Did you know that besides cherry blossoms, moss phlox is another popular flower to see in spring in Japan? Moss phlox has a beautiful pink and white colour and the gradation accompanied by the blue sky of spring is a magnificent view. Let’s take a look at some of the most beautiful moss phlox scenes you can find in Japan, from famous places to secret places all over the country.

There are many spots that are in full bloom from mid-April to May, making it the perfect holiday spot for driving and going out during Golden Week. The flower carpet that spreads all over is very photogenic, so it’s a good idea to take your camera with you when you go out.

When to see Moss phlox in Japan?

The best time to see Moss phlox in Japan depends on the location and the exact area, but generally, you can see sunflowers in Japan around April to May.

Where to see Moss Phlox in Japan

This place was designed by world-famous garden designer Kazuyuki Ishihara as an annex garden of Hotel Mori no Kaze. The vast site of about 20,000 square metres is divided into an area called Forest Valley, where the green and waterside scenery is impressive and Forest Hill, where moss phlox and nemophila bloom. You can enjoy the moss phlox that borders the outer circumference of the Forest Hill area while strolling along the path. When you come in, take your time to enjoy the scenic view from the observatory with the bell of love and happiness.

Best time to see: Mid-late May

Jupier Land Hirata [Hirata Village, Fukushima Prefecture]- A purple, white, and pink carpet that wraps the undulations of the mountain in spring colours.

Jupier Land Hirata is a leisure facility that spreads out at the foot of Mt. Yomogida, a symbol of the village. The moss phlox that covers the slope is a spring tradition that represents the village, and about 250,000 plants bloom on a vast 2.3 hectares site. There’s a special activity, where you can go around the park in a cart and enjoy the stalls during the festival. From the observation deck, you can see the moss phlox and the surrounding mountains at a glance. Check out the heart-shaped art spots made with different colours in this area.

With a planting area of ​​17,600 square metres, the moss phlox in Hitsujiyama Park is one of the largest in the Kanto region. With more than 400,000 stocks of 10 varieties planted against the backdrop of Mt. Buko, the symbol of Chichibu, features a wavy design. Enjoy various expressions of this flower from various angles.

Fuji Motosuko Resort displays a carpet of colourful turf of flowers in pink, red, purple and white. The are is huge, at 1.5h hectares at the foot of Mt. Fuji. The Peter Rabbit English Garden, where you can enjoy the world of Peter Rabbit is also open in the venue.

In Maruyama Park, about 14,000 moss phlox are planted in the park along the sea. From spring to GW, you can enjoy bright flower carpets in white, pink, and light purple.

Inukawa Moss Phlox Village is about 20 hectares of paddy fields. The fields are surrounded by pink moss phlox. The carpet of Shibazakura has a feeling of openness that makes you want to lie down! The spectacular view drawn on the canvas of the paddy field is also fantastic. Have fun while strolling around the area.

Around: Late April to mid-May

Known for having the “Flower Corridor in the Sky”, you can see a magnificent view of the flowers around the mountaintop at an altitude of 1358m. There is also the Chausu Terrace on the mountaintop. You can relax here while watching the Southern Alps.

The moss phlox overlooking while riding the sightseeing lift is unique to this spot. It will be lit up during the Shibazakura Festival.

Shima City Tourist Farm is adjacent to the roadside station Ise-Shima along National Highway 167. Seven kinds of moss phlox are planted on the gentle slope, and you can enjoy colourful gradations such as red, blue and white.

The park opens when the moss phlox bloom. Depending on the weather, the opening hours might change, so make sure to contact them in advance for the most up-to-date information.

Hanago OKADA [Kyotango City, Kyoto Prefecture]- Spring flowers such as tulips, rape blossoms and moss phlox are all in one place.

Hanago OKADA is a flower park that opens for a limited time from spring to early summer. Approximately 18 kinds of flowers can be enjoyed in the vast open space. Enjoy the changes in colours and expressions that change one place to another. There are also benches scattered around the park, so you can take your time and enjoy a little picnic in this space.

The gorgeous spring in the Odori area known for its beautiful rice terraces. There are more than 100,000 moss phlox on the slopes of the rice terraces. A glossy pink colour jumps in to fill the field of view. The viewpoint is a picture where you can enjoy the upside-down moss phlox reflected in the rice fields and the observation plaza where you can see the whole view below.

Shida Flower Garden is a flower garden created by the owner’s couple over the course of five years with the idea of ​​”being a place of relaxation in the area.” The 3,000-square-metre site is filled with spring flowers such as cherry blossoms in late March and moss phlox and azaleas in mid-April.

Sky Observatory in Oita is an observatory built along the Bungo Kuroshio Line, a spectacular road that extends along the coastline. In spring, moss phlox blooms on the road leading from the parking lot to the eastern store. It looks like a pink veil and shines in the blue sea and sky of Hyuga Nada.

The moss phlox garden at Naoshiba Adachi Sakuraen was cultivated with great care by the late Nao Adachi. Currently, his wife and daughter continue to take care of the area. As many as 53 kinds of moss phlox are in full bloom in the garden of 30 acres.

In the flower and green theme park Tokyo German Village, 250,000 moss phlox bloom as if covering a vast slope. The Shibazakura Festival is held from the beginning of April when it is in full bloom, and it is usually visited by many people.

At Tomita Sato Niwa Koen’s Hana to Midori no Sato, where you can experience farming with a hands-on farm, 120,000 moss phlox bloom in the spring. Access by train is a little inconvenient, but it is a hidden spot where you can enjoy free parking and free admission, along with the stunning view of moss phlox.

Approximately 260,000 red, white, and pink moss phlox are lined up in a band around Shibazakura no Oka, and the flowers bloom in patterns such as swells and swirls. There is also a heart-shaped moss phlox, which is unique here.

What do you think about these flowers in Japan? There are so many different colours, shapes, types, sizes of flowers, no matter which season you decide to visit Japan, you will sure to be able to find gorgeous Japanese flowers to enjoy!

Find out all about the different flowers in Japan you can enjoy throughout the year here. Check out what, when and where to see these flowers here: Cherry Blossoms, Tulips, Azaleas, Roses, Poppies, Salvia, Hydrangea, Iris, Lavender, Indian Lotus, Sunflowers, Ume and Moss phlox.