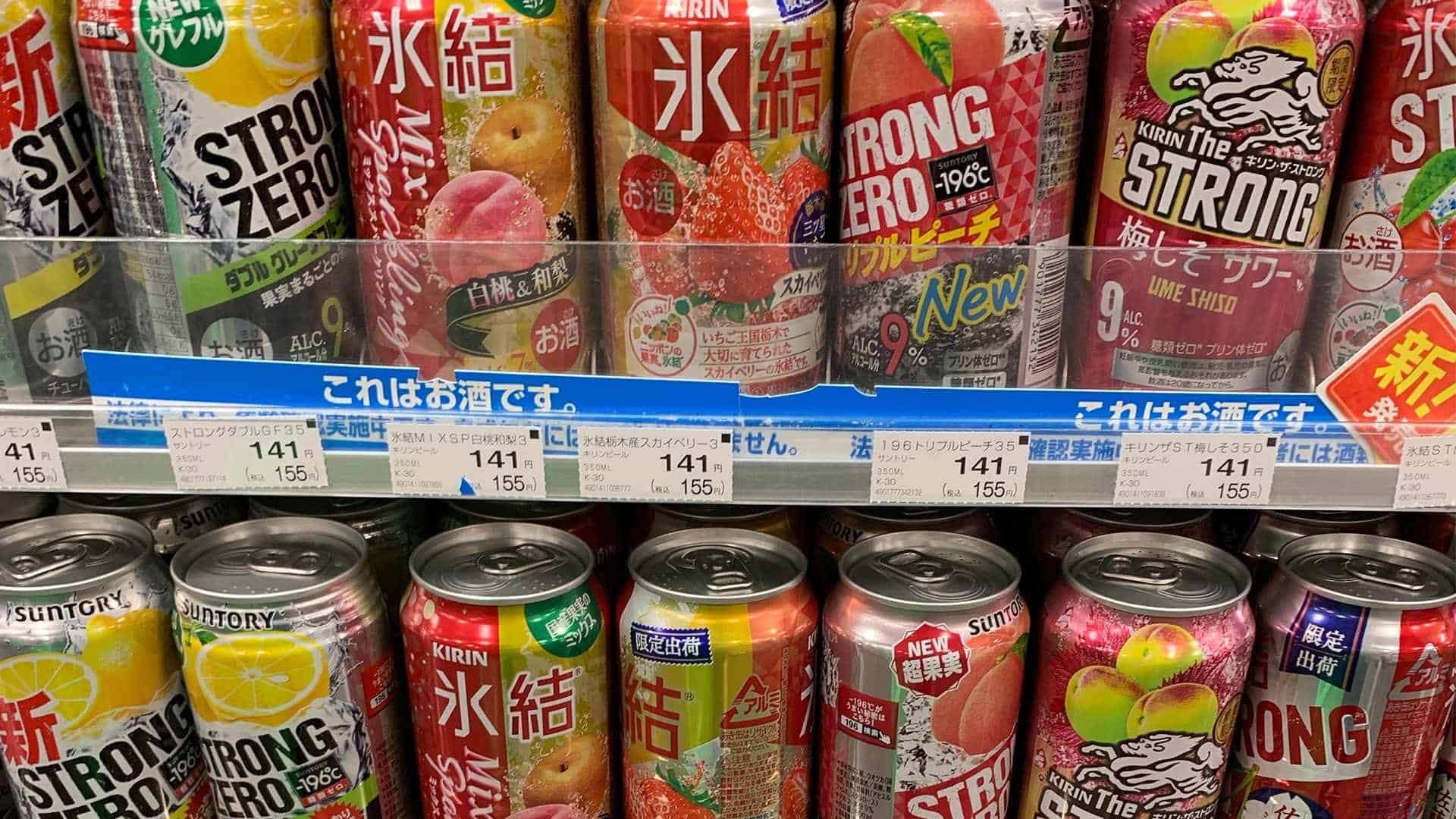 If you’ve ever been to Japan, you’ll probably have seen the Japanese drink, Strong Zero, in convenience stores or supermarkets. You may have even been persuaded to try one. If you haven’t tried these chuhai mixed drinks, or if you don’t know what I’m talking about, you’re missing out! If you are overseas, don’t worry, you can still get these amazing drinks!!

A Strong Zero is a chuhai, which is shochu—a traditional Japanese liquor made from potatoes, barley or grains—mixed with carbonated water and different flavours. For those of you who don’t like the taste of alcohol, chuhai is a great option.

They are pleasant and easy to drink. They contain delicious fruit flavours like lemon, lime, grapefruit and more, and you don’t taste the alcohol as much. You could go on drinking it without realising it’s an alcoholic mixed drink.

Find out more about the different Japanese drinks, Japanese beers, the special strong zero you can get in Japan and how to prepare for a night out in Tokyo.

There’s a wide range of chuhais to explore, each with different flavours, alcohol contents and sugar contents. However, Strong Zeroes may be the most notorious chuhais in Japan.

Strong Zeroes are named as such for its “strong” alcohol content of 9% and “zero” in that it has “zero” sugar in it. Though 9% might not sound like a lot, a single can is actually roughly equivalent to two beers. On top of that, this Japanese drink is carbonated, and the carbonation helps transfer alcohol into your bloodstream faster; you’ll feel the alcohol kick in quicker. This is a mixed drink carefully designed to mess you up. Some have likened it to the American Four Loko.

It is the go-to drink for both locals and foreigners before heading to a club or before starting a wild night. It is the ultimate pregame drink as just a can or two (priced at around USD$1.80 for a 500ml can, and USD$1.40 for a 350ml can) will get you a good proper buzz before your night even really begins.

If you are interested in checking out other Japanese liquors, you can have a look at Japanese alcohol and Japanese beer!

Strong Zeroes are also easily accessible, found in all convenience stores and supermarkets. Here’s a list of some Strong Zeroes so you’ll know what to look for when you get there.

When a person mentions Strong Zeroes, this is the one that comes to everyone’s minds. It’s the most widely available Strong Zero in Tokyo. They usually come in fruit flavours, from their classic lemon and lime to the more unique pickled plum and bitter yuzu. Though it has an alcohol content of 9%, you can barely taste the alcohol. Instead, it’s a light and refreshing drink that’ll still give you the kick many drinkers want.

If you’re looking to get really drunk, chug this Japanese drink. It’ll hit you hard in a couple of minutes.

Note that as it lacks the “zero” of “Strong Zero” in its name, there is a small amount of sugar in Hyoketsu Strongs.

Unlike Suntory and Kirin which are both large and famous alcohol companies, Takara Shuzo is a smaller, lesser-known alcohol company that also does business in seasonings and biotechs. They sell Japanese rice wine, Japanese plum wine, Chinese alcohol, and, of course, Strong Zeroes.

Their can is named “can CHU-HI Dry” which has an ABV of 9%. It may be harder to find in convenience stores than its counterpart, the “can CHU-HI”, which is in a silver can as opposed to the can CHU-HI Dry’s black can. The can CHU-HI is classified as a Strong rather than a Strong Zero as it has sugar in it, but its ABV is still a high 8%. If you want something sweeter, go for this one.

Their names are similar so you might get them mixed up in convenience stores, so here’s a simple breakdown:

This Japanese drink is neither a Strong Zero nor a Strong. However, its higher-than-average ABV of 6% makes it a good backup for a stronger-than-usual drink if Strong Zeroes and these chuhais aren’t to your liking, so we’ve decided to include it in this list.

While you’re in Tokyo, you may want to have some wild, drunken nights out, and Strong Zeroes will definitely help you do just that. However, if you haven’t had any of these drinks before, take it easy and try them out slowly first. They affect everyone in different ways and you wanna make sure these drinks agree with you before you chug one down. If you like them, try more flavours while you’re still in Tokyo! There may even be special seasonal ones, depending on the time you visit.

If you want to hear some reviews of these chuhai drinks, check out our video that we have linked above, where a few members of our team (new to Tokyo!) try out different Strong Zeroes!

Have you tried Strong zero or any chuhai drinks? Did you grab them in convenience stores? If you have any stories you’d like to share, please include them down below in the comment section!